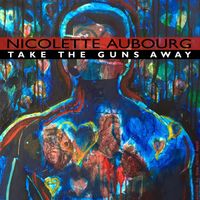 From the recording Take The Guns Away

Addressing the epidemic of mass shootings in America, this original composition is a musical cry for gun control and a tribute to the victims and survivors of gun violence. It was recorded six days before the mass shootings in El Paso and Dayton.
Production by Erik Eldenius (drummer for Billy Idol) weaves a poignant and haunting tapestry of piano with acoustic guitar and vocals (Nicolette Aubourg), before culminating in the powerful rhythm section of bassist Jorgen Carlsson (of Gov't Mule) and drummer Eldenius which invokes the chaos, terror and tragedy of the final list of mass shootings.
Credits:
Music & Lyrics by Nicolette Aubourg ©2019
Produced, Engineered and Mixed by Erik Eldenius
Mastering Engineer: Steve Holroyd
Nicolette Aubourg: vocals and acoustic guitar
Erik Eldenius:  drums, piano, electric guitar
Jorgen Carlsson: bass
(P) Syresham Music/Nicolette Aubourg (ASCAP)
℗© Nicolette Aubourg 2019
Original painting by Dina Farris Appel ©

Take the Guns Away
(music & lyrics by Nicolette Aubourg ©2019)

Is the right to use a gun more sacred than a life?
No consequence enough to make you change your mind?
The bullets ricochet the same way every day.
Take the guns away.

Echoes in the schools, through hallways and classrooms,
gunfire in theaters and places of worship,
‘cause when a man holds a gun, it is Fate that he becomes.
It was never meant to be - this sabotage of Destiny.
Take the guns away.